So I finally finished another UFO! I had one more niece on hubby's side to make a quilt for so I chose to finish my Skill Builder Sampler to complete. Here is a pic on our front porch. 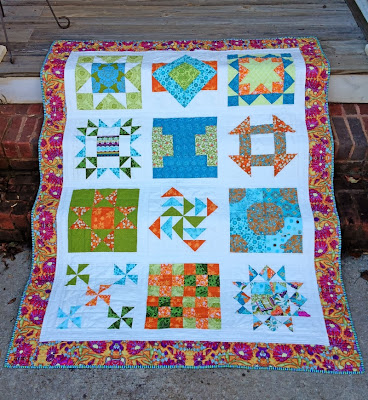 I added sashing in the Kona bleached white, then added a border in the same fabric I used as another niece's backing fabric. The backing was something I picked up when our LQS went out of business. I love the colors and it blends perfectly with the front colors. 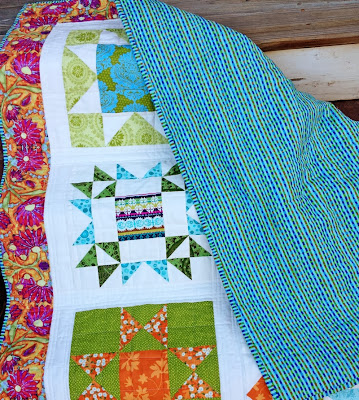 I used the same fabric to bind it which I loved. I love stripes that run into the quilt instead of running alongside it.

Rachel's Quilt: My version of Skill Builder Sampler quilt along from Sewn by Leila
Lap Size: ~60x70   (I forgot to measure it before it left)
Quilting: Straight line quilting
Posted by Melinda at 1:27 PM 3 comments:

The Most Wonderful Time of the Year!

Merry Christmas! We have already opened presents and are vegging out at this house. The kids are enjoying new Wii games, while I am preparing my new gift into my sewing room. I'm so excited! It pays to have a hubby who can handle power tools. I knew exactly what I wanted for Christmas. I put in my request and hubby found some bookshelves at a fairly good price. Here's mine at the moment.

Yippee Skippee!!! Mine is not screwed together yet (so no, it's not crooked) because he wanted to wait until I got it where I wanted it. He said the store had two black shelves and one white so, surprise! Mine is black! Plus he used floor tiles on the top which makes it slick. I love it. I'm currently making attempts to clean up my sewing area so I can fit it in there. Mine was also scaled down because I don't have as much room available, but it will definitely be loads of room for me! Hopefully I can keep things straight with this and the bookshelf. Storage!!!
In case you wonder, I got the idea from this Ikeahackers version.

I will post better pics when I get it in place. I also finished a quilt from my To Do list and will post about it tomorrow. For now, I hope you all have a wonderful holiday season!!
Posted by Melinda at 6:30 AM 3 comments:

I love Christmastime! We finally got our tree decorated and there's just something about the tree that just clinches it for me... 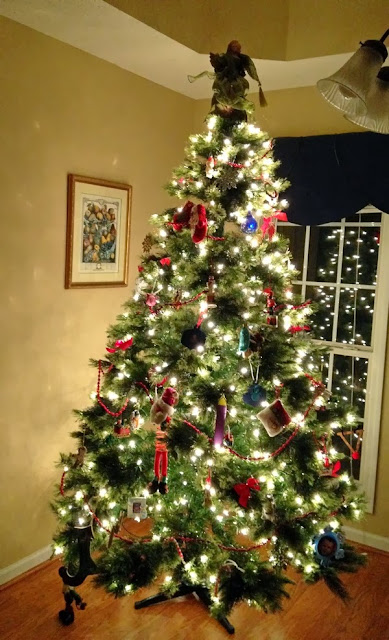 I love it! The kids went crazy putting their ornaments on this year. I keep boxes for each of them where they keep all of their ornaments. That way they have their own ornaments to take for their own trees when they grow up. My mom always got us a new ornament each year in our stocking so that is definitely a tradition we continue to do. Where's the tree skirt? Well,...I had a quilted one I bought about 14 years ago and it just looked awful. So I decided to take this Christmas quilt top... 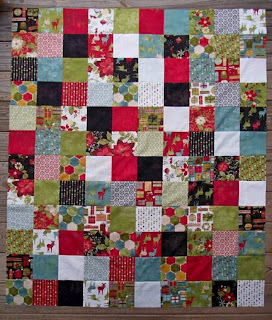 and turn it into a tree skirt. So far I took off two rows from the long side to make it about 45" square. I think I'm going to just keep it square and whip it up. I've got some fabric I purchased a long time ago that will be perfect for the backing. That's my plan for tomorrow; to get it pinned and quilted. I doubt I'll have time to get the hole cut and get it bound but I'll try!
This week is going to be crazy at the theater. I don't remember if I mentioned this but I'm doing Annie and this week we are there every night from Monday to Sunday. We have dress rehearsal Monday thru Wednesday and opening night is Thursday night. Sold out!! I'm excited but a bit nervous cause the gave us this past week off so I'm scared that we're going to be a bit frantic over the next three days trying to remember everything we're supposed to do as well as getting used to the costume changes. I'm just in the ensemble and a Boylan sister for the radio show and I have to change clothes 6 times!!! Luckily sometimes I'm just throwing a coat on over a servant's outfit so hopefully that will be a quick change. If you're anywhere near Georgia, come see it! I think it's going to be really cute!
Posted by Melinda at 4:57 PM 2 comments:

My sister in law posted a #windowwednesday picture on Instagram which I thought was a cool idea, so I did it too. Then I thought it might help me remember to do it again if I posted it here. My idea with this is to post pictures FROM windows as well as pictures OF windows if they are memorable. This one is from the front of my house. Love how it depicts fall around here. 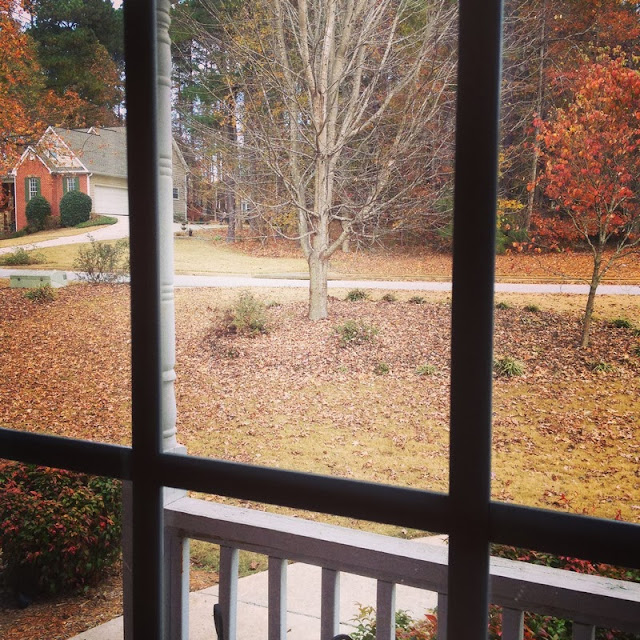 Posted by Melinda at 2:48 PM No comments:

Happy Birthday to my Hubby!!!

Exactly a week after my birthday and it's hubby's birthday! I whipped up some cod and shrimp with black eyed pea and corn salsa, and buttermilk herb biscuits. Then for dessert I decided to forego the cake and make these...

Salted caramel nutella stuffed double chocolate chip cookies! Oh....my....gosh! Run, do not walk, to this recipe! About one is all you can eat at a time but they are SOOOO good. I love salted caramel.
Posted by Melinda at 4:51 PM 2 comments:

Email ThisBlogThis!Share to TwitterShare to FacebookShare to Pinterest
Labels: birthday


Well, the kids and I had a wonderful Halloween and my birthday yesterday was great. As you can tell, my kiddos were the Bat Kids! 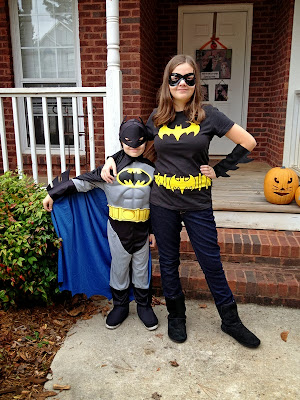 I did have to do one final tweak to my daughter's costume. I picked up some cheap black masks at Michael's but when she tried it on, it just did not work. So I found one I liked online and used a silver Sharpie to draw off the parts I wanted to remove. Here's the before and after of what I did. 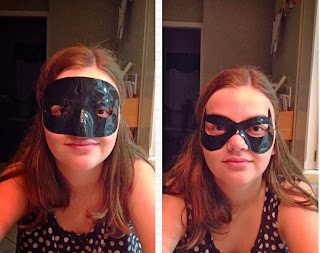 I thought it turned out pretty good!

My neighbor and I took our kids to Publix where they had a few games set up. Then we traveled over to Wendy's where it just so happened to be $.99 meals for the kids that night. They also had a clown doing face painting. One of my neighbor's kids had dressed as the Cheshire Cat so she asked if he could enhance it with some face painting. He did an amazing job! 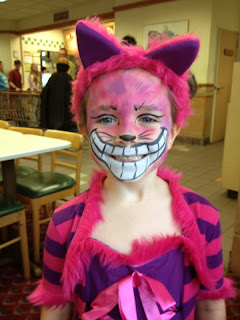 How cute is that? After Wendy's we visited the home of a theater friend who was having a little get together. She and her hubby had made up lots of little "Harry Potter-like" party foods and even had a drink my son loved. They took rubber gloves and froze cranberry juice in them. Then they pored cranberry Sprite in the bowl over dry ice. It looked like hands were floating in the punch which my boy thought was so cool! Plus the 'smoke' from the dry ice added to the affect. 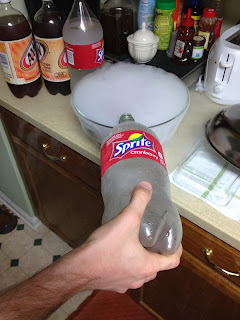 After all this they finally got to do some trick or treating and still came away with quite a haul.
Then yesterday was my birthday. It's also my neighbor's birthday so we usually end up giving each other gifts, but this time we decided to go on a birthday tour. We took my daughter and two of hers, then drove to Warm Springs. First stop? 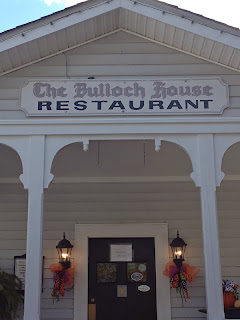 We had a little home cooked southern food at The Bulloch House. Yum! Then we walked around the square and did some shopping. I came home with several scarves, some soaps, and a few Christmas gifts. When we got home, hubby had cooked a pot of minestrone soup and had flowers on the table. I got a gift card to a local spa so I'll have to figure out what kind of treatment I want to try. Plus I need to figure out what to get him cause his birthday is next Saturday and I have no ideas! Plus my daughter's birthday is Wednesday and I have no ideas for her either. Yuck!!!
Posted by Melinda at 6:05 AM 2 comments:

Over the past several years I have noticed an increase in groups of people who choose not to celebrate Halloween. I find this interesting since I would venture to guess that most of them participated in it as children, and would not be surprised at all if these groups DID participate in Easter egg hunts (eggs were originally decorated with wishes written on them and placed in windowsills for the sun god Ra) and Christmas trees (in many countries evergreens were thought to keep away ghosts and witches, and were still seen as pagan symbols as late as the 1840's).  The child centered dress up and treat giving activities of today's Halloween is a time of celebration and fun... and as with most holidays, it IS what you make of it. In honor of the holiday, I wanted to share a post someone put on Facebook today. I think it expresses the sentiments I have on how I view Halloween very well...

On Halloween, don't be a Grinch. It's not a religious holiday, but still a fine excuse to extend fun, kindness, hospitality and generosity. Odds are that it may be the only day all year that you open your door to many of your neighbors. Odds are that this may be the only day of the year that at least one of your trick or treaters is greeted with kindness and a smile. Odds are that at least one family on your doorstep can't afford extracurriculars, movie tickets, roller skating, etc... For them, this night of free fun is anticipated for months. Odds are that the kid ringing your doorbell so late isn't actually being greedy, but got a late start with a single parent who had to work late. Odds are that many of those teens who show up at your doorstep aren't actually up to mischief. They may be simply clinging to a childhood that slipped away way too quickly in all the busyness of life. Just something to think about. On no other holiday does opportunity to be giving and compassionate come knocking on our doors.
Posted by Melinda at 5:27 AM 4 comments:

Get this widget at roytanck.com

Received 2/12 from Michelle at Quilt Matters

Melinda
I love God and my family. My crafting has included embroidery, crochet, cross-stitch, sewing, pottery and quilting. I love recycling and upcycling items.

Great Tutorials by Others